The Colombo Lodge was founded in 1914 and was located at 857 Seymour Street. The members bought the location for a mere $500 and all that was there was a barn. With a horse and a hoe, they dug out the dirt under the barn and made a basement. Repairs continued to take place on the old building until it was sold in 1993 for $180,000.

The new building, located at our present address, was built in 1993 and cost the members of the lodge $1,400,000.00. Costs that were well below due to the countless hours of its members who assisted with labour and expertise on the project. The lodge currently has 234 members and the oldest member dates back to 1945, where he was inducted at the age of 23.

The Italian Cultural Centre has donated $50,000 to RIH and numerous other monies to various other organizations and charities in Kamloops. Colombo Lodge was also very proud to be able to donate $11,000 to the North Thompson relief fund to assist the fire victims of the 2003 summer fires. 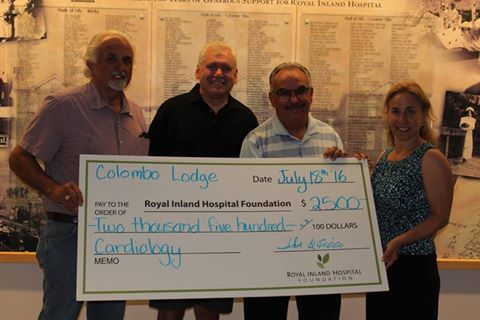